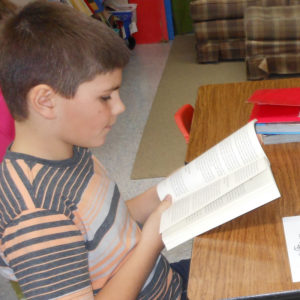 A group of fourth grade students is preparing for a visit to Leisure Village to interview the Elders using questions they have formulated in their class discussions. I visited the class last week.  Using a PowerPoint presentation, along with open discussion, the students were introduced to the Elder writers. Each student has a copy of the book to use during the project.

A great deal of planning and preparation goes into a project of this magnitude with much conversation between the teacher and the writing facilitator. The classroom teacher offers the following observations: 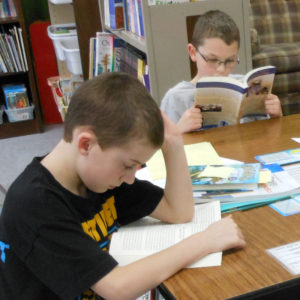 The students enjoy reading the books together during our “silent” reading time, and now they are recommending the ones they want me to read aloud at “read aloud” time. One parent commented that she thinks the project is wonderful, to be able to forge those connections with the elders and knows the value in that. A couple of the staff will be purchasing copies of the book for gifts.

My students and I have thoroughly enjoyed reading the book. It’s amazing to see a group of five fourth graders, all boys, sitting around a table with a copy of the book in hand, reading, laughing, and saying, “Wow! That’s really cool!”

I hope it lights some fires under their families, and themselves!

In a letter to the parents, the teacher quoted Glenna Johnson Smith’s forword:

In today’s fractured and frantic world, it helps children to know who they came from. It doesn’t matter how we write our history, as long as we do it.” 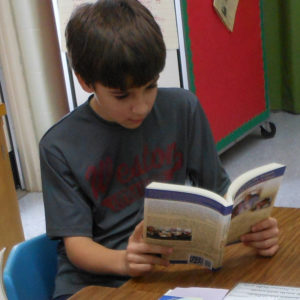 I am anxious to visit other classrooms in the County and work with students of all ages. As a retired teacher with experiences from kindergarten to high school, I enjoy spending time with students and helping them to connect to their history in new ways. 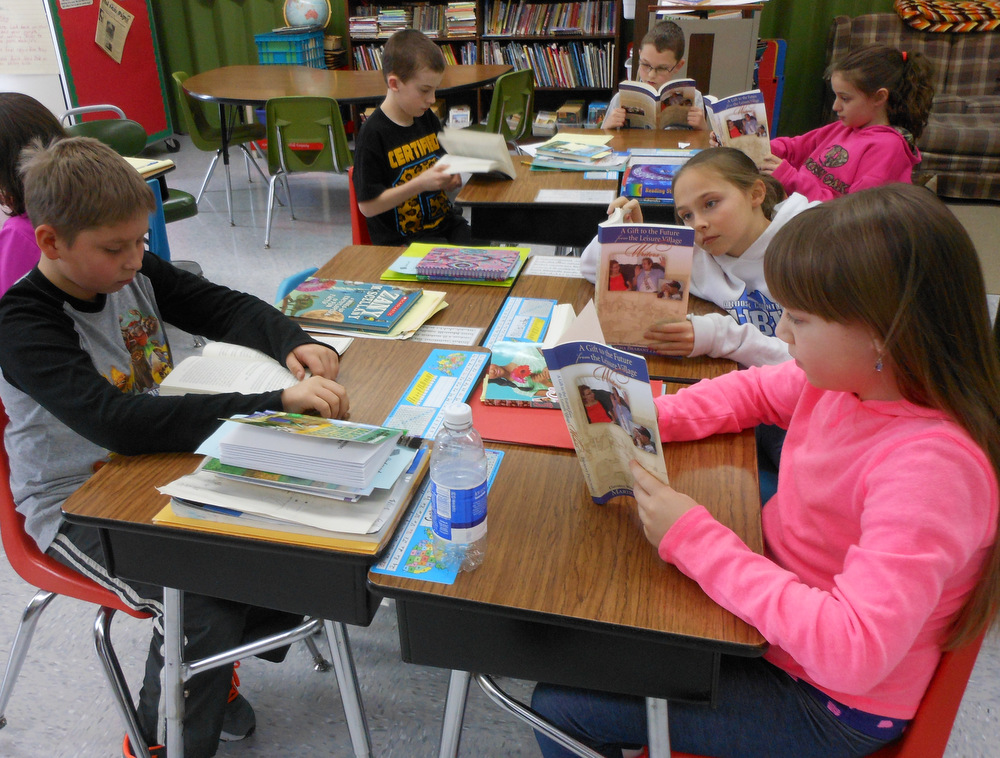 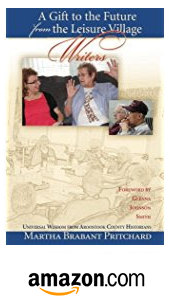 To be or not to be? I’ve fought this concept like I fought the idea of learning to work on a computer back when Maine Governor King came up with the brilliant idea to give every seventh grader a laptop to use. I was teaching seventh grade at the time so it fell to me to learn to use a computer.

Now it seems that a BLOG is playing more and more in my mind as a valuable tool to be used in conjunction with my new vocation—WRITER. Yes, I’ve flirted with the dream of seeing some of my voluminous essays, poems, or internal conversations taking shape in a book or two. Now, with the publication of A Gift to the Future from the Leisure Village Writers, I’m learning, at the ripened age of sixty-seven, that there are many unanticipated aspects of this brave new world of publishing that will require me to grow up—again.

BLOGging. The word reminds me of gagging. And it is the word more than anything that has fed my antagonistic attitude toward this aspect of self-promotion—which I also find distasteful but newly necessary.

And maybe if it was just me, just my work as I’d always anticipated, maybe I’d still be fighting within myself to promote through BLOGging. But it isn’t. I am the voice of the Writers of Leisure Village. I’m twenty years younger than most of these beautiful writers and they have entrusted me with their work. To be on not to be? Well, for the sake of the Elders whom I have come to respect and love, I will make this attempt—nay, this inroad into the future of the way things are.

I was looking for the trick our editor used to designate divisions within the text of our book and I discovered instead “clipart.” Now I used this when I was teaching seventh grade and I found it amusing, but I really wanted something less pushy for this BLOG-thing. However, until my web-guru wakes up, I’ll stick these leaves in. “Web-guru” is my own term for the younger woman who has kept current with the how-tos and the why-tos of the cyber world. She’s my version of a guardian angel whom I have to beg to send me an invoice when I know I owe her more than she’s going to charge me for her work. Until I figure out how to build this BLOG-thing, she’ll take care of it for me and I’ll just send her my rambling thoughts. Time for more leaves?

Maybe this is the place to insert this email I opened last night. It gave me such a boost that I couldn’t put off the BLOG-thing any longer.

A couple of questions arise here:

1. How do I get rid of the yellow color that happens when I cut and paste from the email to a word document?

2. Can I use a person’s name when I enter a correspondence on a BLOG?

3. Will BLOG-readers want to share this sort of chest-puffing?

4. Is it pertinent to insert my response to this writer?

So far I’ve assumed that potential readers will have found this BLOG because they are familiar with the book to which I refer. Perhaps this isn’t necessarily so and I should take the time to discuss A Gift to the Future from the Leisure Village Writers.

To borrow a phrase from a well-known musical by Steven Sondheim, A Funny Thing Happened on the way to . . . bringing my own book to the end of an eight year writing adventure. I felt that I wanted/needed input from an audience to determine once and for all if my memoir-turned-biography was ready to fly. I’d spent many fruitless hours, days, weeks, months trying to secure a literary agent. I’d sent hundreds of dollars to contests as reading fees with excerpts from my 108,000 word document with no takers. I’d finally reached the conclusion that if this book, From Bombs to Babies was ever to be published, I was going to have to tackle the job myself.

“Publishing Platform” – my new nightmare reality. I didn’t have one and really only wanted to write, not build a platform. But in the interest of striking out on that path I reached out to a church coffee house event. I told a wolf story from my mother’s repertoire and was encouraged to go a bit further into public life. Next I approached the local library with the idea of offering a weekly storytelling spot. That idea fizzled, not through lack of effort—I packed up borrowed china teacups, teapot, and cookies each week, hauled them upstairs to my designated storytelling venue, and waited. And waited. And gave away cookies and tea, greeted and waved farewell to my hungry audiences, and waited some more. I think we gave this an eight week trial and when it became obvious that I could not compete with the bank of computers in the adjoining area, I gave up. At the library.

Next I approached the folks at Leisure Village with my newly minted business cards that declared me a writer and storyteller. Tina, the activities director, welcomed me to give storytelling a try with the residents. I was assigned to the library on the second floor of the retirement facility and the people who came that first day have stuck with me for nearly two years. Our numbers grew rapidly and we were soon meeting in the dining room with Tina rearranging her “Fitter-Sitters” exercise group to give us the hour we needed. I encouraged the participants to share anything they might have written and they encouraged me to read them my entire manuscript rather than trying to tell my stories.

Our next growth spurt required that we meet twice a week in order to have enough time for everything we wanted to share. When I asked the director of the facility if I would be allowed to take over the dining room twice every week his response was, “You’d DO that?”

“I don’t think I have a choice. These people want to share their writing skills and I’m thrilled with their work!” By this time I had given everybody a new notebook, pack of pencils and pens, artist tablet (in case they wanted to illustrate their work), colored pencils, and new crayons. We had a nice conversation about how the smell of new crayons hasn’t changed in fifty years.

Material kept flying between us and it wasn’t unusual for me to lose track of some of their pieces, but only temporarily. They’d remind me. By December of 2015 I had collated their hodge-podge of photocopied, handwritten, and long-ago- typed material. I reproduced everything on my small home copier and punched holes. For Christmas that year they each had a copy of their stories bound in a three ring notebook. And they were delighted.

But they weren’t done. The novelty of writing hadn’t worn off yet. Some of our faithful participants had lost their ability to organize their thoughts onto paper but retained their desire to write, so I started interviewing them. I began using a tape recorder so I could preserve their exact words. I typed these pieces up, copied and handed them out, pre-punched, so they could be added to the individual notebooks.

And then it hit me! We were writing a book! When I dared to utter those words, my elder writers protested.

“Wait a minute,” they insisted. “Martie, you’re the writer. You’re supposed to be publishing a book.”

One thing about life; if you remain open to new ideas, you are bound to surprise yourself. We had recently celebrated the 100th birthday of one of our most prolific writers. As I looked around I became aware, maybe for the first time in our many months together, that every one of my new friends was closing in on this amazing age. I felt an urgency (which I didn’t share with them) about getting their book published before I tackled my own. As they objected in an effort to save me from myself, I insisted that by publishing their book first I could make all the mistakes on theirs and reserve perfection for my book.

Time for some more leaves.

Happily we are all still learning. And nobody has dropped out of our group because of lack of interest. A few are getting more tired and some new faces have begun to show interest now that they can see that we know how to turn ideas into a book. And there will be a Volume Two. But we’ll shorten the title a bit. A Gift to the Future from the Leisure Village Writers is a bit cumbersome.